As of May 21, 2021 Origen by way of a plan of arrangement has spun the Silver Dollar property out to form Forty Pillars Mining Corp. (CSE-PLLR) in exchange for 6,485,174 common shares of Forty Pillars at a deemed price of $0.08 per Share. Of these shares 3,891,102 Shares were distributed to Origen’s shareholders and 2,594,072 Forty Pillars Shares were retained by Origen.

The 3,345-hectare Silver Dollar project covers approximately 10 km of the 40 km long Camborne Fault System (CFS) and is 45 km southeast of Revelstoke, BC. The CFS hosts over 85 mineral deposits and showings, including 18 past producing historic mines of high-grade gold & silver + lead and zinc.

Historically, small prospect “miners” exploited only mineralization observed in outcrop and most exploration was fragmented due to a multitude of small claim owners with competing interests. Origen has assembled the district under its control in order to carry out a consistent and comprehensive exploration program to integrate historic data within a broader regional framework.

Due to the extent of the property and the diverse nature of mineralization, the project has been subdivided into 3 map segments: Gilman (southern), Mohawk (central) and Goldfinch (northern).

Several styles of mineralization occur from gold-bearing iron sulphides in the north to silver-rich galena and sphalerite in the south.

The Gilman sector includes the Gilman, Beatrice and Silver Dollar historic occurrences.  Gilman reportedly shipped fourteen tonnes of mineralized material in 1933 grading 69.9 g/t Au and 89.1 g/t Ag. From the Silver Dollar occurrence, the Silver Pass Development Syndicate is reported to have processed six tonnes in 1947 of mineralized material and recovered 9,860 g of silver, 1,378 kg of lead, and 1,009 kg of zinc.

Mineralization at Beatrice, consisting of galena, sphalerite, tetrahedrite and pyrite, occurs as irregular veins within shear zones, on bedding slips and in cross cutting faults. The veins range in width from a few centimeters up to 2 to 3 metres wide.  A third vein, known as the Gold Lode, was exposed in a series of open cuts (since covered) over a distance of “a few hundred metres” parallel to an access trail. This vein, reportedly up to 1.8 metres wide, returned grades up to 5.1 g/t Au and 32.5 g/t Ag as recorded in a 1914 annual report. The vein had a strike of 155 degrees and a steep northeast dip. 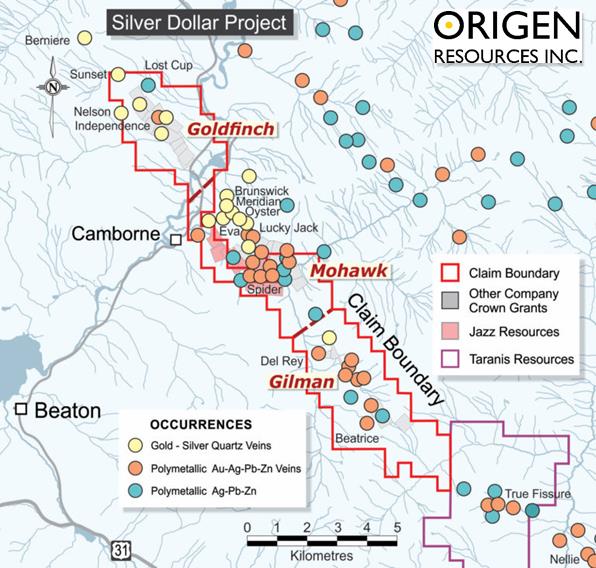