Origen holds a 100% interest in the high-grade Bonanza Mountain gold and copper project located in the historic Knight’s mining camp, Grand Forks, BC.

The Bonanza Mountain property consists of three claims totalling 1604 ha., is readily road accessible and is situated approximately 20 km due north of Grand Forks, BC, on the east slope of the Granby River. The Project encompasses the historic Knight’s Camp, centered on the Bonanza, Mountain View, Colorado and Nevada lapsed Crown grants (“Bonanza Crown Grants”) on what is locally known as Bonanza Mountain.

Bonanza Mountain was the scene of significant exploration and development activity over a short period from the late 1800s through to the early 1900s. Historic details of the activities have been sourced from local newspapers from the period, original Crown grant documents, Annual Reports to the Minister of Mines, and the online GATOR system (a database registry of Crown land records for British Columbia).

The first mention of high-grade gold at Bonanza Mountain was reported on July 20, 1896 by the Spokane Chronicle. The development of a 50 foot shaft centered on the discovery followed with the Grand Forks Miner reporting on January 16, 1897 that the owners, “are now working on the Bonanza property in Knight’s Camp. The [recovered material] increasing in value as they sink.”

This was not the only discovery. The Midway Advance reported on April 26, 1897 that, “…numerous veins of iron and copper sulphide outcrop [on the Bonanza group of claims], from a few feet to ten feet in width…” and returned high grade gold and copper in assay*. 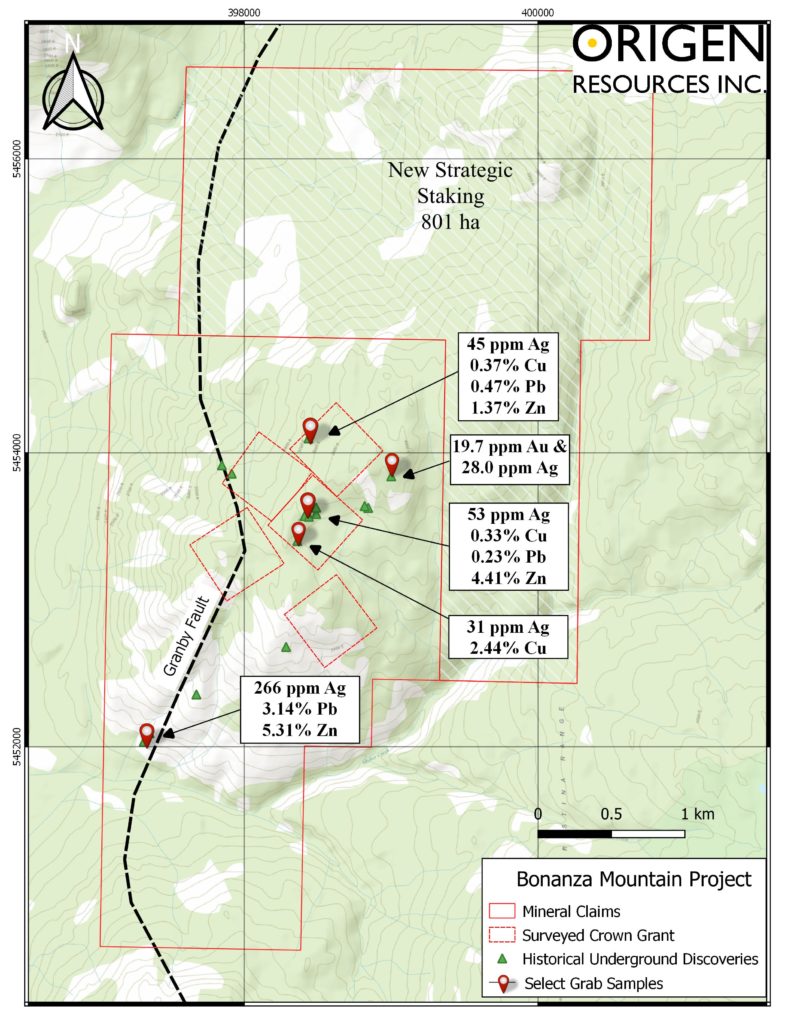 Origen completed a surface exploration program in the fall of 2019, comprising reconnaissance of the historic mine workings and the collection of 1,074 soil samples and 54 rock grab samples.  During the fall 2019 exploration program, three separate styles of mineralization were discovered at Bonanza Mountain:

*Note: The grab samples mentioned above are solely designed to show the presence or absence of mineralization. Grab samples are by definition selective, and not intended to provide nor should be construed as a representative indication of grade or mineralization at the Project.

The higher-grade grab samples were collected at, or in close proximity to, the 15 historical workings, comprising shafts, adits and blast pits, identified on the property.

The geochemical soil sampling program delineated a greater-than-one-kilometre-long-by-150-metre-wide north-south coincident Cu-Ag-Pb-Zn soil anomaly that follows a significant topographic feature identified through aerial drone orthophotography and is open to the north along this same feature. Most historic workings are within or adjacent to this multielement soil anomaly.