The LGM project is comprised of 42 contiguous mineral tenures totalling 26,771 ha.  Highway 37 is approximately 2.5 km east of the edge of the property, and the Galore Creek access road runs along and through the southern boundary.

A combination of Cu-Au porphyry and gold vein exploration targets have been identified on the property and have had limited exploration since the 1970’s resulting in the discovery of many prospective targets that show mineralogical and geological similarities to important nearby deposits and discoveries. 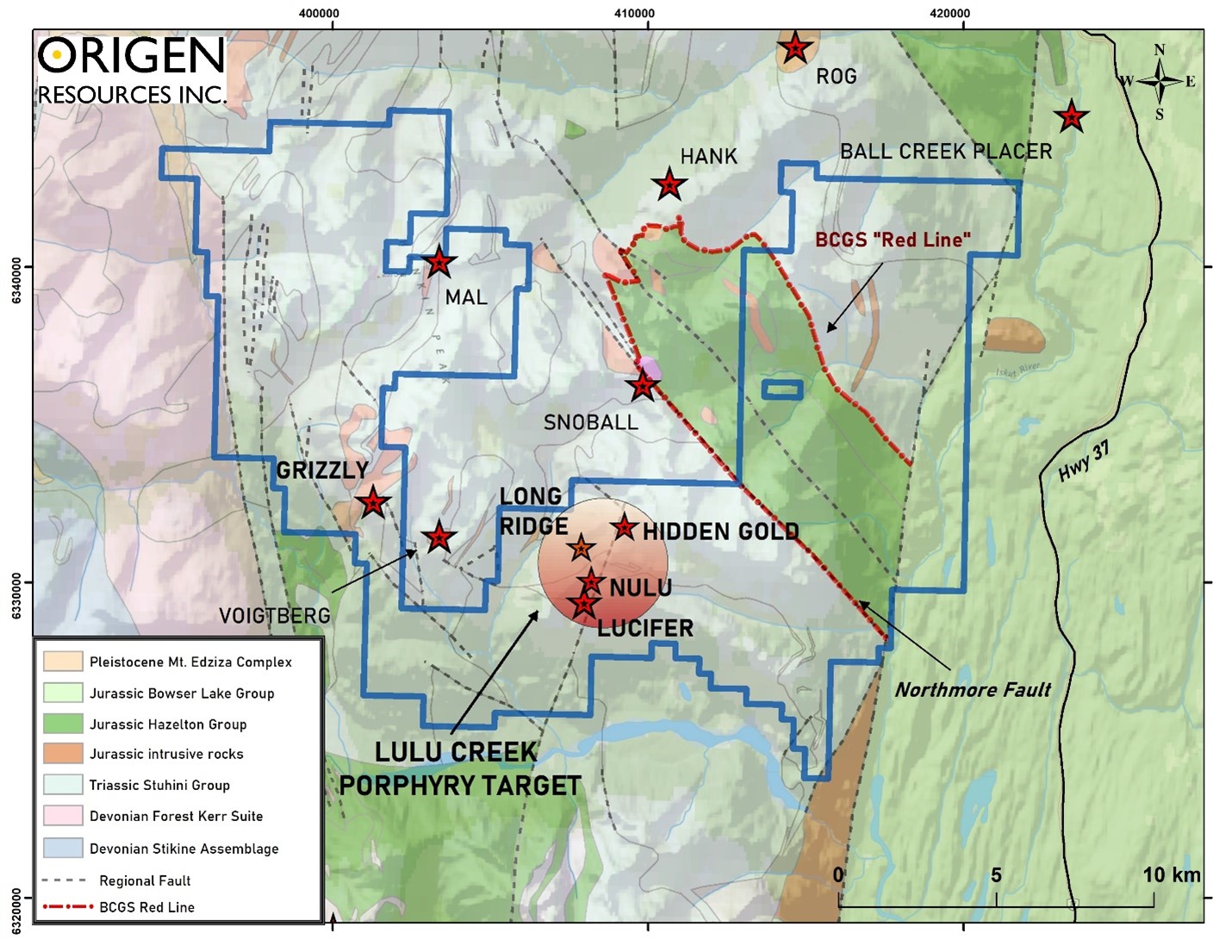 The newly defined Lulu copper-molybdenum-rhenium porphyry target area encompasses the Lucifer, Nulu, Hidden Zone, and Long Ridge mineralized zones, and now stretches over a 4 x 5 km area exhibiting geochemical similarities to other large nearby porphyry deposits1.  The results from the 2020 Phase 2 reconnaissance field work has increased the prospective corridor of this target area significantly from the historical coverage, has revealed two new highly mineralized and prospective zones, and may be indicative of a more substantial and extensive mineralizing system than previously considered.  The Lulu Porphyry Target Area will be a priority for the 2021 field season.

Within the Lulu Porphyry target is an ASTER identified alteration zone which covers an extensive 2 km x 3 km area and remains open to the northeast, where it is covered by snowpack, and to the northwest and southwest, where it is obscured by vegetation cover.  Sampling conducted by Noranda in the target area during the 1990’s identified anomalous copper, molybdenum and gold in soil samples; sampling conducted during the 2020 Phase 2 field work discovered two new prominent mineralized occurrences, the Au-Ag Hidden Zone and the Cu-Mo-Ag-Re Long Ridge Zone.  These two newly discovered areas significantly expanded the Lulu Porphyry Target and firmly supports the district-scale potential of this area.

(1)   Referenced nearby historic resources, deposits and mines provide geologic context for the Project, but are not necessarily indicative that the Project hosts similar potential, size or grades of mineralization. 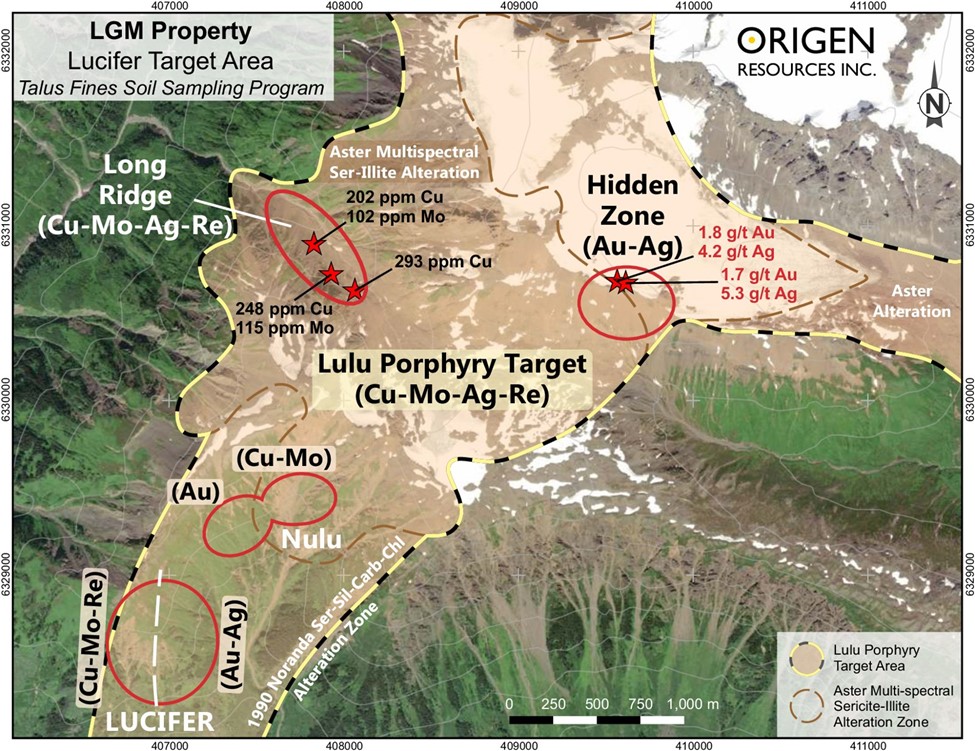 The Lucifer showing consists of a 300 m x 300 m gold-in-soil anomaly discovered by Noranda in 1991.   The showing is on the SW nose of a long NE-trending ridge that displays silica-sericite-carbonate-pyrite alteration over an area of 2.5 km x 1 km and only saw minimal field exploration by Noranda.  Early Jurassic Texas Suite intrusive rocks, thought to be the engine driving mineralization at the Kerr, Bronson Slope, Snip, Brucejack and other nearby deposits, are present as NE trending dykes within this alteration zone.

Prior exploration work included geochemical and geophysical programs on the surrounding area and culminated in a maiden drill program during 2018 that returned anomalous gold intercepts from two of the three shallow holes completed.  The drill program was limited in scope and it is the opinion of the Origen team that the source of the gold anomaly has yet to be identified.

The Nulu target was discovered during the 2020 exploration program following up on two anomalous soil samples taken by Noranda in 1991:

A 175-meter reconnaissance soil line 900 meters northeast of the Lucifer target confirmed the historic gold anomaly. These two historical soil samples are situated approximately 105 m from each other along the contour of the slope and have no reported data points between them. The Origen crew collected seven contour soil samples, at 25-meter intervals, approximately 75 meters upslope of the historic Noranda samples. Several samples returned anomalous values in copper, gold, and molybdenum. Included in the new soil sampling series is one sample that returned a high gold value of 303 ppb and coincides with a peak in copper-molybdenum.

The Hidden Zone is a gold and silver geochemical anomaly located in the northeastern Lulu Porphyry Target Area.  Consistently elevated gold and silver results were obtained on two adjacent reconnaissance sampling lines, with two samples returning grades in soil of 1.8 g/t Au with 4.2 g/t Ag and 1.7 g/t Au with 5.3 g/t Ag.  The anomaly is believed to be located close to the source as both sample lines were collected along ridges, with the northern most line paralleling the edge of a receding glacier limiting the distance and direction of mechanical mineral transport. The anomaly remains open in two directions, to the southwest and to the northeast under snow cover, and currently covers an area of 400 metres by 200 metres.

A 600-metre-long copper-molybdenum-rhenium anomaly, defined by 25 consecutive highly-anomalous talus fines samples, was discovered 750 metres to the west of the historical Noranda sampling and is situated in the northwest of the Lulu Porphyry Target Area.  This newly discovered anomalous extension to the historical work returned values of 101.5 ppm to 293.1 ppm copper, 19.2 ppm to 114.6 ppm molybdenum and <0.005 to 0.127 Rhenium.

Rhenium anomalies were not recognized in the Lulu Porphyry Target Area until this sampling program and provide valuable insight as to the Lulu Porphyry Target Area’s potential.  Rhenium is one of the rarest elements on the planet and is used in high temperature superalloys and catalysts and its isotopes are used in cancer treatments.  Rhenium is usually recovered as a by-product from the molybdenum mineral molybdenite, with the majority being recovered from rhenium-rich, copper-molybdenum-gold porphyry systems.  The presence of rhenium is highly significant as anomalies are closely correlated with molybdenite in rhenium-enriched zones of copper-molybdenum-gold porphyry systems, making it a diagnostic geochemical fingerprint of these systems.

Exploration has occurred sporadically at the Grizzly zone since 1970, with the latest work program carried out in 2008. The Grizzly prospect is a Cu-Au porphyry target defined by a 1200 m x 500 m Cu-Au soil anomaly. As part of the 2008 work program, the first ever drilling at the Grizzly prospect took place with results returning grades that were not consistent with grades seen on surface, but still produced wider intervals of lower grade gold and copper mineralization. Initial data review and interpretation by Origen’s geological team targets the source of the soil anomaly further upslope from the area of 2008 drilling. Origen field crews visited the Grizzly target area during the 2020 field season to further vector in on the source of the soil anomaly. Field observations suggest that the geological setting is quite complex and further structural analysis is warranted to vector in on the source of the large soil anomaly. 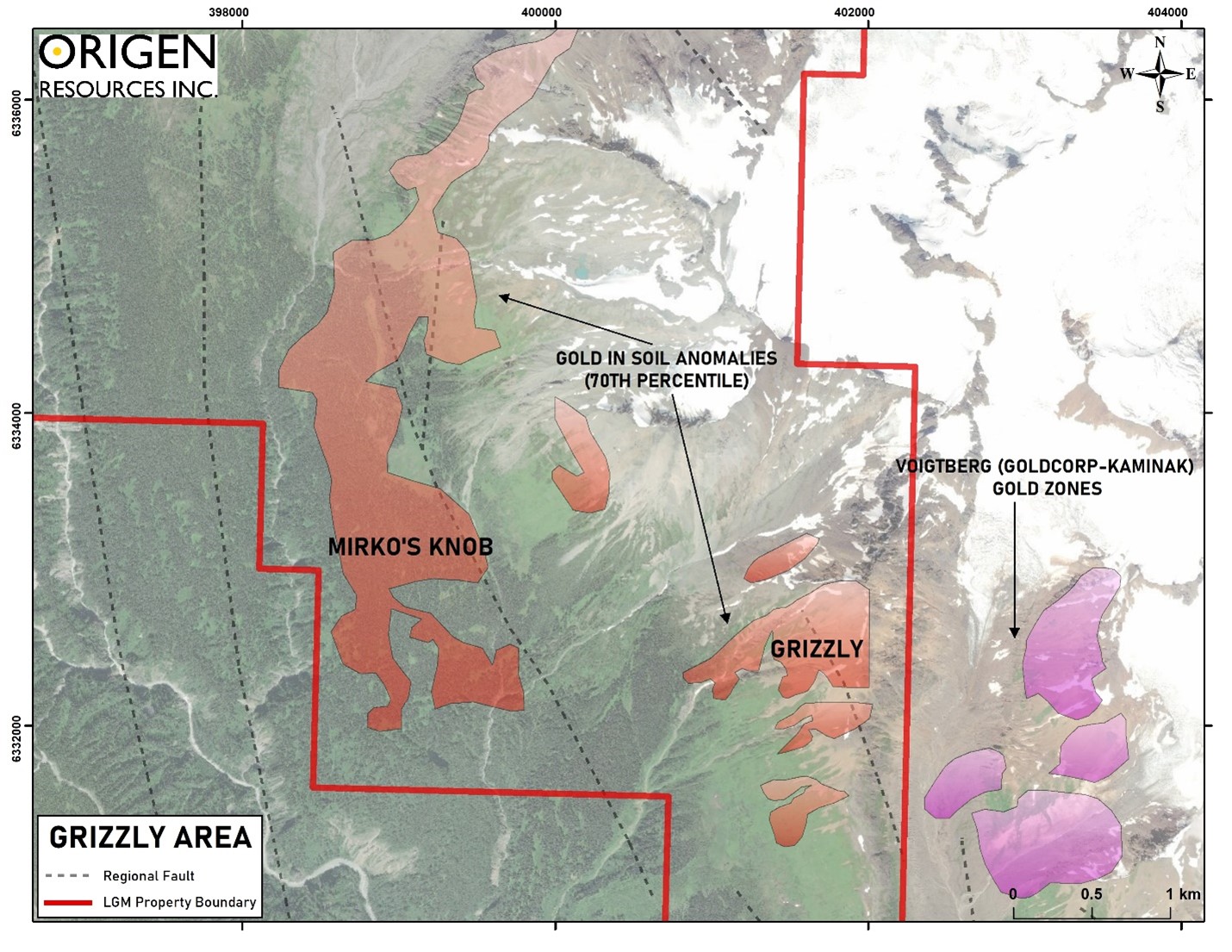