Vancouver, B.C. May 14, 2020.  Origen Resources Inc. (the “Company” or “Origen”) (CSE:ORGN) is pleased to announce that it has entered into a Letter of Intent (the “LOI”)  whereby it can acquire a 100% interest in the 26,771 hectare (ha) LGM property and the 3,971 ha Wishbone property located in British Columbia’s renowned Golden Triangle from Orogenic Regional Exploration Ltd. (the “Vendor”)

“The LGM and Wishbone properties give Origen a launch pad for discovery in BC’s mineral rich Golden Triangle.  The availability of such a large, well endowed, land package was a unique opportunity and the Origen team is excited to get to work unlocking the potential of this flagship asset,” states Gary Schellenberg CEO of the Company.

The LGM project is comprised of 42 contiguous mineral tenures totalling 26,771 ha.  Highway 37 is approximately 2.5 km east of the eastern edge of the property, and the Galore Creek access road runs along and through the southern boundary.

A combination of Cu-Au porphyry and gold vein exploration targets have been identified at LGM and the recent identification of many prospective targets, that show mineralogical and geological similarity to important nearby deposits and discoveries, reflect the limited exploration conducted since the 1970’s.  The Red Zone, Lucifer and Grizzly occurrences are considered by Origen’s geological team to be the Company’s priority exploration targets at the LGM project for this field season.

Figure 1: Map of LGM Targets and Nearby Mineral Occurrences 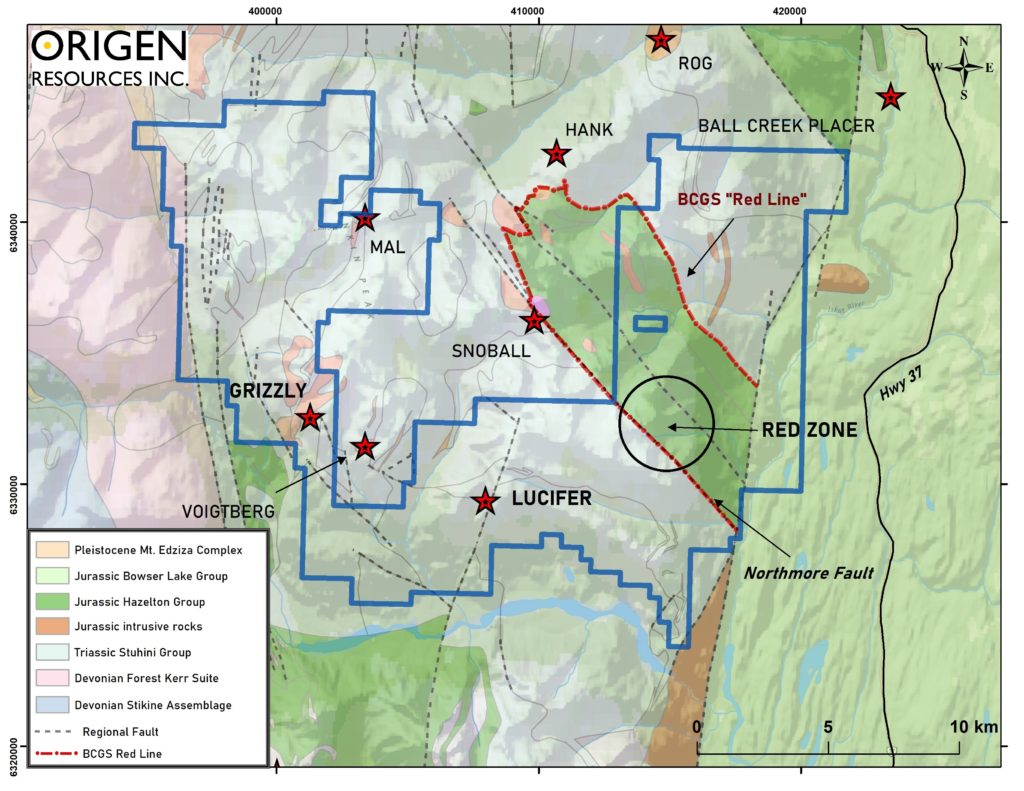 During due diligence work by Origen, a new highly prospective target area was identified.  Satellite imagery revealed two significant gossanous zones recently exposed by glacial retreat, that have not been previously explored, with one of the gossanous zones notably extending below the glacier.

A Gossan is the oxidized surface expression of rocks enriched in iron and sulphide that may potentially represent the upper and exposed part of a mineral deposit and is a positive indicator and guide for exploration in the region.  The gossanous exploration targets at ‘Red Zone’ lie within Hazelton Group rocks along the Northmore Fault and bear geological and structural similarities to mineralization on the adjacent Snoball property immediately to the northwest.

The NW/SE trending Northmore Fault locally defines the contact between the Triassic Stuhini Group and the Jurassic Hazelton Group and is considered the mineralization control structure on the adjacent Snoball property. In addition to defining a geological contact, the Northmore Fault also represents a portion of the B.C. Geological Survey’s “Red Line,” interpreted to be a prospectivity indicator in the Golden Triangle.  The “Red Line” occurs at the discontinuity between Triassic Stuhini Group and Jurassic Hazelton Group and links the geological setting of the Snoball showing along the Northmore Fault with the prospective ‘Red Zone’ target areas on LGM property.  Due to the geological significance of the Northmore Fault and the presence of exposed gossans along the Stuhini/Hazelton contact, Origen considers this area to be a priority exploration target for the upcoming 2020 field season.

The Lucifer showing consists of a 300 m x 300 m gold-in-soil anomaly discovered by Noranda in 1991 and  only experienced minimal field exploration.   The showing is on the SW nose of a long NE-trending ridge that displays silica-sericite-carbonate-pyrite alteration over an area of 2.5 km x 1 km.  Early Jurassic Texas Suite intrusive rocks, thought to be the engine driving mineralization at the Kerr, Bronson Slope, Snip, Brucejack and other nearby deposits, are present as NE trending dykes within this alteration zone.

Subsequent exploration has confirmed the gold-in-soil anomaly, conducted geochemical and geophysical programs on the surrounding area and culminated in a maiden drill program during 2018 that returned anomalous gold intercepts from two of the three shallow holes completed.  The drill program was limited in scope and it is the opinion of the Origen team that the source of the gold anomaly has yet to be identified.

Exploration has occurred sporadically at the Grizzly zone since 1970, with the latest work program carried out in 2008.  The Grizzly prospect is a Cu-Au porphyry target defined by a 1200 m x 500 m Cu-Au soil anomaly.  As part of the 2008 work program, the first ever drilling at the Grizzly prospect took place with results returning grades that were not consistent with grades seen on surface, but still produced wider intervals of lower grade gold and copper mineralization.  Initial data review and interpretation by Origen’s geological team suggests the source of the soil anomaly may lie further upslope from the area of the 2008 drilling.

The 3,971 ha Wishbone project, located 12 km west of the LGM project, consists of 10 claims and is contiguous to the eastern boundary of Teck/Newmont’s Galore Creek copper gold mineral development project which is one of the world’s largest undeveloped copper-gold-silver deposits1.  The Wishbone contains a series of gold and silver quartz-carbonate veins and breccia occurrences over the nearly 12 km length of the claims.   Glacier retreat in recent years has exposed between 50 m and 500 m of unexplored area that includes extensions to known prospects.  The property was discovered by Teck in 1980 and fieldwork throughout subsequent years continued to expand upon Teck’s initial successes on the Property.  The Company continues to compile and review all available data in respect to the Wishbone project and will issue an update in due course.

Origen is pleased to announce the appointment of Blake Morgan to the roles of President and Director effective immediately.  Mr. Morgan has 15 years’ experience in the mining industry including 10 years dedicated to the mining and natural resource sector in Australia with Rio Tinto, BMA Metals (subsidiary of BHP) and Santos Ltd.  Gaining first-hand knowledge, culture, and an understanding of mining operations he then made the move from Australia to Canada and has been instrumental in consolidating significant exploration land packages and financing their development for private resource exploration companies in British Columbia.

The Company has staked an additional 801 ha contiguous to the Bonanza Mountain gold and copper project to increase the overall size to 1603 ha.  A comprehensive exploration program was carried out by the Company in the fall of 2019 resulting in an open north-south Cu-Ag-Pb-Zn soil anomaly that trends onto the newly acquired ground.

Origen is an exploration company engaged in generating, acquiring and advancing base and precious metal properties.  The Company currently holds a property portfolio of four 100% owned base and precious metal projects in southern British Columbia.  The Company has also entered into a purchase and sale agreement to acquire a 100% interest in approximately 31,000 ha of prospective ground in the mineral rich Golden Triangle of British Columbia.