Vancouver, BC, September 6, 2022.  Origen Resources Inc. (the “Company” or “Origen”)  (CSE:ORGN; FSE:4VXA) is pleased to announce that it has received results from its initial sampling program on its prospective lithium bearing Los Sapitos project in San Juan Province, Argentina.

Prior to the early onset of winter in the southern hemisphere, the Company’s consultants were able to investigate and sample 12 sites at Los Sapitos.

“We are encouraged with the new data we received which shows evidence the project has the potential to host all three target styles of lithium we had hoped to be present; lithium in brine, lithium in hot springs, and lithium in clay. Our global search utilizing our teams 15 years of lithium exploration and development experience culminated with their refined exploration techniques has enabled us to have a ‘first mover status’ on a new lithium rich frontier. This has resulted in our acquisition of a very large land position in a highly prospective new lithium rich region.” states Gary Schellenberg, Company CEO.

The initial program focused on obtaining representative samples of both brine and clay, primarily in the northern part of Los Sapitos salar.  This work was successful and done in preparation for property wide sampling, geophysical and remote sensing programs expected to start as soon as weather permits.

12 sites were investigated and sampled for both brine and sediment.  All of the sediment samples were taken from near surface exposures and five of the 12 sites were found to contain clay minerals with four containing clay minerology favourable for hosting Lithium. Three contiguous sample sites contained illite and one site contained montmorillite.  Work at Lithium America Corp’s (LAC.T) Hackett Pass project in Nevada has demonstrated that lithium hosted in illite can be a very prospective target.

Brine temperatures were collected in the field to evaluate proximity to possible hot springs.  Temperatures ranged from 9.4 to 14.8 °C with the second highest temperature 3.1 °C lower at 11.7 °C.

These early results are significant because they show variations in mineralogy, chemistry and temperature at test sites which can be used to 1) vector toward lithium concentrations and 2) train satellite or airborne hyper-spectral image processing to recognize prospective areas across the entire property.  The Company also plans to use ground-based geophysics when weather permits to identify structures that control closed basins for brines and focus hot spring and volcanic activity that can generate clay and hot spring-based lithium.  These methods, used together, are forming a powerful means for a low cost, efficient and non-invasive discovery to be made. 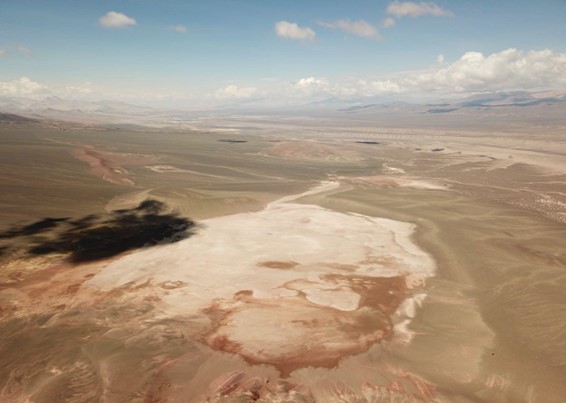 About the Los Sapitos Lithium Belt

The belts tectonic setting, geothermal activity and observed brine chemistry are similar to that of the Lithium Triangle to the north and give rise to the potential for discovering structural traps for lithium-bearing aquifers at depth.  The area is also host to vast alluvial sand and clay deposits that have never been investigated for their lithium content.  Very limited exploration for lithium has occurred within the project area.  The next phase of work will have the exploration team focussing  on conducting a regional geophysical gravity survey to determine controlling structures, basin shape and consequently, potential traps within the basins.  In addition, the team will conduct systematic sampling of not only the brines, but also investigate the extent and characteristics of lithium-rich clays.  This survey will include initial ground truthing for planned remote sensing and/or hyperspectral surveys of the claims.  Ulexite (a boron evaporite mineral) has also been identified throughout the belt and indicates that concentrated boron-bearing brines have been present, which is an indicator of lithium prospectivity.

John Harrop, P. Geo., a Qualified Person as that term is defined in NI 43-101, has supervised the preparation, or approved the scientific and technical disclosure in the news release.  Mr. Harrop is employed by Coast Mountain Geological Ltd.  He is not independent of the Company as defined in NI 43-101.