Vancouver, BC, March 3, 2021.  Origen Resources Inc. (the “Company” or “Origen”)  (CSE:ORGN; FSE:4VX) is pleased to announce that it has now received results from its 2020 Phase 2 field program at the LGM property located in the heart of the Golden Triangle in northwestern B.C.

“The size of the Lulu porphyry anomaly combined with the distinct zonation of gold peripheral to it, as seen in other known deposits in the area, demonstrates the potential for Origen to make a significant discovery on the LGM property,” states Blake Morgan, President.

The 2020 Phase 2 exploration program at the LGM involved the collection of 234 talus fines samples along seven widely spaced reconnaissance lines over a two square kilometer area.  The sampling program was focused within the large ASTER identified sericite-illite alteration zone, centred northeast of the Lucifer Au-Cu zone, that contains historical and newly discovered prospects that make up the Lulu Au-Cu-Mo porphyry target (see Company news releases dated August 5, 2020 and September 2, 2020).  The program succeeded in its goal of confirming and extending historical Noranda copper and molybdenum soil anomalies.

The observable area of the ASTER identified alteration zone covers an extensive 2 km x 3 km area and remains open to the northeast, where it is covered by snowpack, and to the northwest and southwest, where it is obscured by vegetation cover.  Sampling conducted by Noranda in the target area during the 1990’s identified anomalous copper, molybdenum and gold in soil samples; sampling conducted during the 2020 Phase 2 field work discovered two new prominent mineralized occurrences, the Au-Ag Hidden Zone and the Cu-Mo-Ag-Re Long Ridge Zone.  These two newly discovered areas significantly expands the Lulu Porphyry Target and firmly supports the district-scale potential of this area. 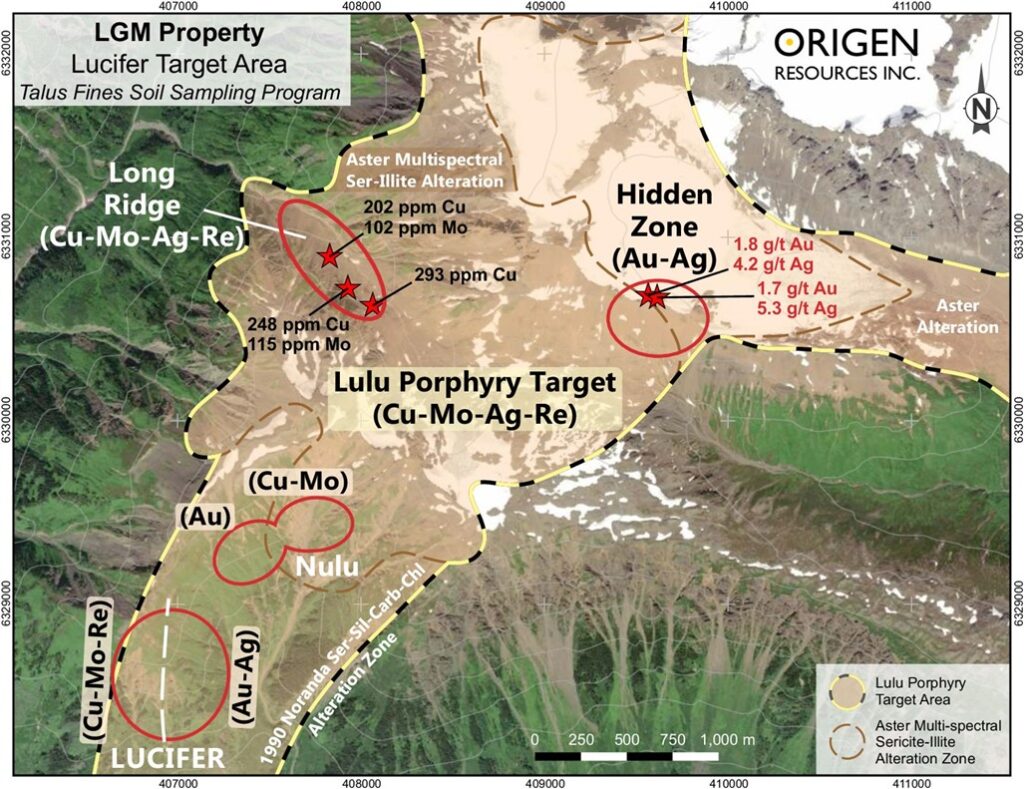 The Hidden Zone is a gold and silver geochemical anomaly located in the northeastern Lulu Porphyry Target Area.  Consistently elevated gold and silver results were obtained on two adjacent reconnaissance sampling lines, with two samples returning grades in soil of 1.8 g/t Au with 4.2 g/t Ag and 1.7 g/t Au with 5.3 g/t Ag.  The anomaly is believed to be located close to the source as both sample lines were collected along ridges, with the northern most line paralleling the edge of a receding glacier limiting the distance and direction of mechanical mineral transport. The anomaly remains open in two directions, to the southwest and to the northeast under snow cover, and currently covers an area of 400 metres by 200 metres.

A 600 metre long copper-molybdenum-rhenium anomaly, defined by 25 consecutive highly-anomalous talus fines samples, was discovered 750 metres to the west of the historical Noranda sampling and is situated in the northwest of the Lulu Porphyry Target Area.  This newly discovered anomalous extension to the historical work returned values of 101.5 ppm to 293.1 ppm copper, 19.2 ppm to 114.6 ppm molybdenum and <0.005 to 0.127 Rhenium.

The newly defined Lulu copper-molybdenum-rhenium porphyry target area encompasses the Lucifer, Nulu, Hidden Zone, and Long Ridge mineralized zones, and now stretches over a 3 x 5 km area exhibiting geochemical similarities to other large nearby porphyry deposits.  The results from the 2020 Phase 2 reconnaissance field work has increased the prospective corridor of this target area significantly from the historical coverage, has revealed two new highly mineralized and prospective zones, and may be indicative of a more substantial and extensive mineralizing system than previously considered.  The Lulu Porphyry Target Area will be a priority for the 2021 field season.

Rhenium anomalies were not recognized in the Lulu Porphyry Target Area until this sampling program and provide valuable insight as to the Lulu Porphyry Target Area’s potential.  Rhenium is one of the rarest elements on the planet and is used in high temperature superalloys and catalysts and its isotopes are used in cancer treatments.  Rhenium is usually recovered as a by-product from the molybdenum mineral molybdenite, with the majority being recovered from rhenium-rich, copper-molybdenum-gold porphyry systems.  The presence of rhenium is highly significant as anomalies are closely correlated with molybdenite in rhenium-enriched zones of copper-molybdenum-gold porphyry systems, making it a diagnostic geochemical fingerprint of these systems.

Origen fieldwork followed industry standard practices for the collection of talus fines and immature soils during the 2020 Phase 2 program.  No field duplicate samples of talus fines/soils were collected and no standards or blanks were inserted since this is not considered necessary or best practice for this sample media.

MSALABS of Langley and Terrace, British Columbia, Canada is a certified analytical laboratory (ISO 9001 and ISO 17025) with experience in the chemical analysis of geological materials.  MSALABS is independent of the Company as defined by NI 43-101.  Samples were delivered to the laboratory by an employee of Coast Mountain Geological Ltd., who were contracted to implement the field program for the Company.

John Harrop, P Geo., a Qualified Person as that term is defined in NI 43-101 has prepared, supervised the preparation or approved the scientific and technical disclosure in the news release.