Vancouver, BC, September 29, 2021.  Origen Resources Inc. (the “Company” or “Origen”)  (CSE:ORGN; FSE:4VXA) is pleased to announce that it has now received the data from the recently completed VTEM geophysical survey conducted by Geotech Ltd. on its LGM property (“LGM” or “Property”) located in the heart of the Golden Triangle in northwest B.C.

“The results of the airborne geophysical survey exceeded our expectations.  After strongly encouraging geochemical results in 2020, our 2021 survey has added a new dimension to the project as we look deeper and extend existing targets,” states Blake Morgan, Company President.

Modelling of the magnetics and VTEM geophysical surveys flown this summer, by Geotech Airborne Geophysical Surveys of Aurora Ontario, has upgraded the potential and priority ranking for both the copper-molybdenum-rhenium Long Ridge and the Hidden Gold zones.  The geophysics has revealed coincident magnetic and EM conductivity features that closely overlap the Long Ridge surface geochemical anomaly which translates into a compelling drill target.  In addition, the geophysical features extend to the north of Long Ridge into an unexplored area indicating a larger target than currently expressed by the geochemical anomaly.

This new information combined with the geochemical anomalies identified in 2020 have resulted in the emergence of multiple high-priority target areas.  The Company’s next steps will be to refine the target areas in preparation for drill testing.  Geotech has been retained to conduct additional processing and interpretation of the magnetics and VTEM data to assist with the refining of the target zones. 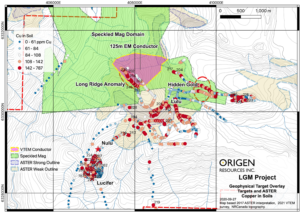 The Hidden Gold zone is a gold and silver geochemical anomaly located in the northeastern Lulu porphyry target area.  Consistently elevated gold and silver results were obtained on two adjacent reconnaissance sampling lines, with two samples returning grades in soil of 1.8 grams per tonne gold with 4.2 grams per tonne silver and 1.7 grams per tonne gold with 5.3 grams per tonne silver.  The anomaly is believed to be located close to the source as both sample lines were collected along ridges, with the northernmost line paralleling the edge of a receding glacier limiting the distance and direction of mechanical mineral transport.  The anomaly remains open in two directions — to the southwest and to the northeast under snow cover — and currently covers an area of 400 metres by 200 metres.

Origen fieldwork followed industry-standard practices for the collection of talus fines and immature soils during the 2020 phase 2 program. No field duplicate samples of talus fines/soils were collected and no standards or blanks were inserted since this is not considered necessary or best practice for this sample media.

MSALABS of Langley and Terrace, B.C., Canada, is a certified analytical laboratory (ISO 9001 and ISO 17025) with experience in the chemical analysis of geological materials. MSALABS is independent of the company, as defined by National Instrument 43-101. Samples were delivered to the laboratory by an employee of Coast Mountain Geological Ltd., which was contracted to implement the field program for the company.

Talus fines and soil samples were processed by drying, screening to less than 80 mesh (MSA code PRP-757, PSC-110), digestion of a 20-gram cut by aqua regia and finishing by 39-element ICP-AES/MS (MSA code IMS-128). Samples with greater than 0.5 part per million gold were reanalyzed if sufficient sample remained using a 30-gram cut for digestion by fire assay flux followed by an AA finish (MSA code FAS-211).

John Harrop, PGeo, a qualified person as that term is defined in NI 43-101, has prepared, supervised the preparation or approved the scientific and technical disclosure in the news release.