Vancouver, B.C. August 5, 2020.  Origen Resources Inc. (the “Company” or “Origen”) (CSE:ORGN) is pleased to announce the commencement of fieldwork on its wholly-owned LGM property (“LGM” or the “Property”), comprising 26,771 hectares (ha.) in the highly prospective Golden Triangle of Northwest British Columbia.  Field work commenced in mid-July and is designed to target three separate gold +/- copper targets within the Property in preparation for a larger, follow-up exploration program.

“After a thorough review of all available data, our geological team is excited to get boots on the ground and turn newly developed theories into reality.  Having so many exciting targets in BC’s mineral endowed Golden Triangle has the entire Origen team eagerly anticipating what the phase one explorations results could yield,” states Blake Morgan, Company President.

Origen has identified a highly prospective zone that bears geological and structural similarities to mineralization on Evergold Corp.’s Snoball Property2.  Recent satellite imagery shows new distinct gossans located within mapped Hazelton Group rocks and along the Northmore Fault that have not seen any recorded exploration work.  In addition to defining a geological contact, the Northmore Fault represents a portion of the B.C. Geological Survey’s “Red Line”, interpreted to have a significant spatially association with most major metal deposits in the Golden Triangle.  The “Red Line” occurs at the unconformable contact between Triassic Stuhini Group and Jurassic Hazelton Group rocks.  Two segments of “Red Line” contact cross the Red Zone, one of which is traced by the Northmore Fault, and trends from Evergold’s property well onto Origen’s LGM property. Origen will focus a portion of the ongoing field program towards characterizing the mineralized nature of the newly exposed gossans and prospecting the surrounding area.  Initial field observations from the Origen team are very encouraging and appear to support Origen’s current exploration model.

The Grizzly prospect is a Cu-Au target defined by a 1200 x 500 m Cu-Au soil anomaly centered on Grizzly Creek, continuing well upslope to the peak of the ridge. Significant chip sample results from historical trenches situated within the downslope portion of the soil anomaly include 0.87% Cu and 1.51 g/t Au across 20 metres.

Field exploration by Origen at the Grizzly prospect will focus on attempting to decipher the structural complexity of the showing in order to refine drill targeting, as well as verifying historical trench locations.  In addition, the portion of the Au-Cu soil anomaly upslope from the main zone will be prospected and sampled.

Chip samples were sent to Bondar Clegg Co Ltd of North Vancouver for analysis. Rock samples of 30g were digested by flux in a fire assay and finished with AA for gold in addition to a seven element ICP package (Ag, Cu, Pb, Zn, As, Sb, Mo).  The digestion for ICP was not described.  No assay certificates are included in the assessment report. Quality assurance and quality control (“QA/QC”) measures were not documented, however a qualified person for Origen considers that the results disclosed are suitable for guidance and characterization of the area at the current stage of exploration. The soil and chip samples disclosed in this news release were sourced directly from geological maps and reports within assessment reports available on the ARIS (Assessment Report Indexing System). The current exploration field crew will aim to verify the historical results where viable.

The Lucifer Au-Cu showing (“Lucifer”), discovered by Noranda in 1991, consists of a 200 m x 250 m area with > 100 ppb gold-in-soil anomaly and associated rock grab1 samples assaying from trace to > 1 g/t Au.  Of note, the Noranda alteration zone mapped at Lucifer in 1991 and the adjacent Voigtberg Au bulk tonnage prospect2, coincide with an illite-sericite ASTER (Advanced Spaceborne Thermal Emission and Reflection Radiometer) anomaly interpreted by Von Einsiedel in a 2017 Assessment Report from satellite images made available by the B.C. Government and may indicate a similar mineralizing system.

Origen plans to explore the above mentioned Lucifer showing to define more optimal drilling locations as well as investigate a second anomalous gold zone 1 km NE of the Lucifer showing during 2020 fieldwork.  Historical soil samples were widely spaced and minimal rock sampling was accomplished therefore a more tightly spaced soil line is planned, and geological mapping and chip sampling is planned for any altered outcropping rock.

2Referenced adjacent historic deposits and showings provide geological context for the Property, but are not necessarily indicative that the Project hosts similar potential, size or grades of mineralization.

Noranda soil samples lab certificates with Acme Labs of Vancouver and Unique Resources soil samples lab certificates with ALS Minerals are provided in assessment reports. Acme used a 0.2g sample, digested by perchloric/nitric acids and finished with ICP-AES.  For gold analysis Acme used a 10g sample digested in Aqua Regia for an AA finish.  ALS used method ME-ICP41 and determined 35 elements by ICP-AES, and method Au-ICP21 for gold with a 30g fire assay digestion and ICP-AES finish.  For Noranda rock samples Acme used the same methods following pulverization of the sample.  Quality assurance and quality control (“QA/QC”) measures were not documented, however a qualified person for Origen considers that the results disclosed are suitable for guidance and characterization of the area at the current stage of exploration. The soil and rock samples disclosed in this news release were sourced directly from geological maps and reports within assessment reports available on the ARIS (Assessment Report Indexing System). The current exploration field crew will aim to verify the historical results where viable.

John Harrop, P Geo., a Qualified Person as that term is defined in NI 43-101 has prepared, supervised the preparation or approved the scientific and technical disclosure in the news release. 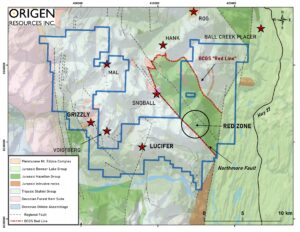 Origen is an exploration company engaged in generating, acquiring and advancing base and precious metal properties.  The Company currently holds a property portfolio of four 100% owned precious and base metal projects in southern British Columbia and recently acquired a 100% interest in the 26,771 ha LGM project and an option to acquire a 100% interest in the 3,971 ha Wishbone property in the mineral rich Golden Triangle of British Columbia.

Vancouver, B.C. September 15, 2020.  Origen Resources Inc. (the “Company” or “Origen”) (CSE:ORGN) is pleased to announce the identification of…

Vancouver, British Columbia, October 27, 2020 - Origen Resources Inc. (CSE: ORGN) (the "Company" or "Origen") is pleased to announce that it has signed…